Busy street, the old city limits. Although the idea of that boundary has long since vanished, or at least moved from here. The church just off to the side there is St Botolph’s and that’s the giveaway; patron saint of travellers. Places where you enter the city. Crossroads. Gates. There’s regularly a St Botolph’s near a gate or an entrance to a town.

The old road is joined by two similarly ancient streets that run in close parallel. The junction looks a little like a π symbol. In that space, where the two roads meet the one, is a mess of buildings. All more than a hundred years old easily. Some older. Various ages. A chaos of rooftops and chimneys, gables, different pitches.

I don’t know if there’s a gap in the middle there. In that space, where the two roads meet the one. Possibly, but it’d be small. The different properties along those three sides must all face back in on each other. Tight streets, the rear of their buildings fighting against each other for space.

I’m across the road, looking up at the tower of another church, the United Reform. Victorian, dark, overbearing. There is often a peregrine here. I’ve known this for a while. She’s bred close by over the last few years. She uses the tower regularly. Sits there glowering at the passers by. An apex predator sitting, watching.

Busy street. Just watching. Unnoticed; thousands of people, but unnoticed. She’s just fifty feet away, watching. Often, she’ll be gripping one of the crosses. Hunched up. Black talons pockmarking the soft stone. On point. Too on the nose. Too Hammer. A gothic extravagance.

The light’s not in my favour. I’m without my bins. Or my camera. I could convince myself I’m looking at a woodpigeon doing a turn. Hunched up, hunkered down, moody, dark against the winter sun’s glare. 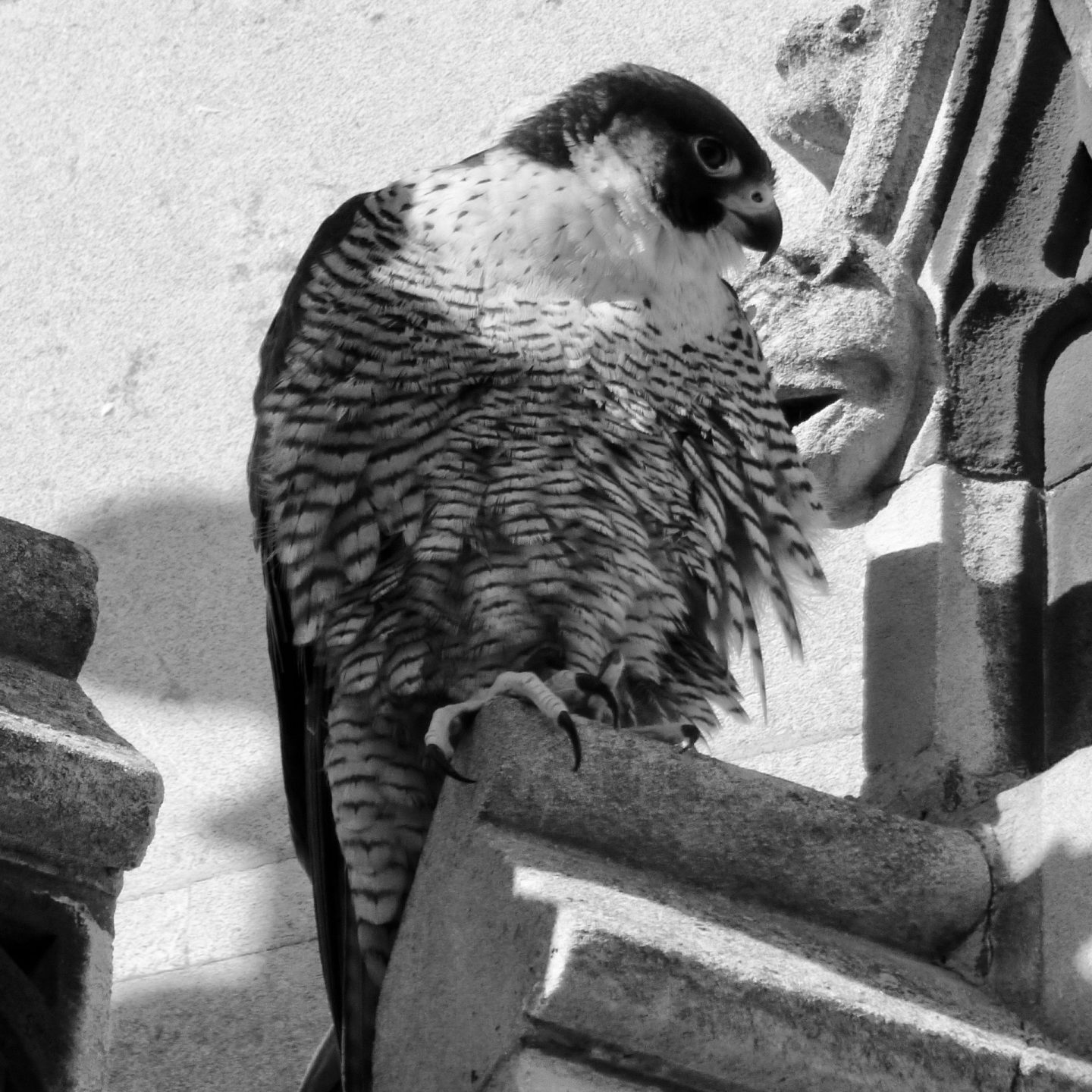 She moves her head a little. Still I’m not sure. Just beyond certainty. Mine, not hers. She’s always certain. Always.

And she does. She pushes against the church tower and becomes unmistakable. A cutlass. A beautiful blade of a thing. Right over me. Brilliant and beautiful, a genius of shape. Not a pigeon.

She flaps once, twice and is gone over the other church, St Botolph’s, over there. Out of view, then back again. Covering the space so swiftly. Pigeons up all over the place. She’s back over my head again and I can see the barring across the chest, just for a moment, the custard yellow legs tucked up. Wonderful. Real terror, death wrapped up in one place.

She lands back on the tower, twenty feet closer than before, and I can see her much better now.

The steel grey of her head. The pool ball black eye. The heavy, powerful chest.

I know I’m smiling. I swear out loud in amazement at her. She’s breathtaking.

And she’s off again. Again over my head. Again towards the other church and then there’s a distinct, appreciable increase in pace and she is away, fast, to the left. Impossible, out of sight in a moment, vanished, behind the old buildings at the junction.

I keep watching. And the first thing that appears is a pigeon. Pale and flapping crazily. And then the peregrine comes back into view faster than she disappeared, and she hits the pigeon, hits it like a bullet. Like a train.

I think – I’m probably adding this – I expect I’m adding it – I’m almost sure I am – but I think I see an explosion of feathers before they both go out of sight. Before they land on the chaos of rooftops and chimneys and gables. At the top of the mess of buildings. At the back of the old properties. Between the tight streets. Above the old buildings that are fighting for space. On the ancient street by the city limits.