For the Nettles Were No Barrier to Me, a Dreamer

For those of us who like to get out into the fresh air, you could argue that there is a little leeway in what we’re able to do at the moment, but I’m finding I have to be imaginative, or at least open to new ideas on what is available.

Having to organise, plan, or schedule exercise might be pretty unusual for all of us, I guess. Well it is for me. I’ve always been happy to read maps and plot walks, but I’m susceptible to the same old boring impulses to which I’ve always succumbed. I always go there or there. Sometimes there. And it usually ends up being this place or that place. Which is all good, there’s nothing wrong with that, I don’t even know why I would suggest there is; it’s a privilege and a joy to see the familiar, as it changes and shifts. Recognising something isn’t the same as understanding, and familiarity breeds understanding. It’s the difference between noticing and just seeing, I guess.

Still, taking a deep breath to disguise the handbrake turn, I’m finding I want to adapt it. I mean, I should walk every day now, not just at weekends – I’ll soon get sluggish if I’m not up and about each morning or evening. And in doing that I’m not going to exactly exhaust what I know, but I am going to see the appeal of changing it up a little.

Which means I’ve been searching for extensions to footpaths and looking in places I’ve not really looked before, or overlooked, or dismissed. Trying to see if I can hook certain paths up. Create circular walks out of routes I know, lined up with those I don’t.

I’ll give you a for instance; there’s a regular walk I do, which for a while during these last few weeks meant most mornings. It goes like this.

I’m out the front door and immediately look right down my little sidestreet, which is east, and if I’m up early enough shows me what the dawn’s done or doing, like an affirmation you’re on the right track. Then, I’m straight up the village High Street, to the church, All Saints, on the far northern edge, basically bordering the fen. At that point I turn right and take a muddy path off the main drag that immediately drags me clear of the houses and beyond the pull of the back gardens and out between two sets of fields. It’s a pitted unmetalled lane that has the open fen to one side (the north) and enclosed fields that used to be orchards on the village side (the south). It eventually meets up with an old drove road that then cuts back into the village and home. So it’s a big triangle, roughly: high street, scruffy fen lane, drove road back to the village. A mile each leg, there or thereabouts. My three miler.

And I know it very well. It’s a pretty route. There are big established trees up by the church; oak and beech and horse chestnut. There are woodpeckers drumming – I have seen greater spotteds there, and the occasional dipping retreating flight of the green who lives in the churchyard – and there are all the usual garden birds calling as you walk past the houses. Doves and pigeons and jackdaws on the chimney pots. Out along the field stretch there are hares on the fen, a fox if you’re lucky. At the moment the hedgerows are frothed with hawthorn and cow parsley. There are blackcaps, and skylarks in the open area in the middle of the skirted triangle. Goldfinches and yellowhammers on the wires. And along the final run to home, a barn owl that I see regularly. A pale and ghostly flourish to sign it all off.

Looking at the 1940s 1:25 Ordnance Survey, I saw that further north, a half a mile or so, running parallel to the second leg of the walk (the fen lane), there is another named pathway. That is, it’s named on that older map. A route I’d never noticed before.

Quite how it had escaped me isn’t that mysterious. One entrance is now on a busy bend of the road that leaves the village and heads to Ely. It’s beyond the speed restriction signs, past where the pavement runs out, and is so unused and forgotten it is mostly blocked by a giant mound of brambles. At the other end it emerges onto the drove alongside some farm buildings and if I’d thought of it or noticed it at all (and I hadn’t) then perhaps I’d assumed it was a private track.

But it isn’t, it’s a hidden footpath. Hidden to me, and my unimaginative eye.

And sure, it requires going out of the village, along a busy and getting busier road, and it needs you to fight through a curtain of briars and nettles, but it’s real, a previously unknown link in a now bigger and richer trek.

I can see it now, as I walk the normal route. I’ll point it out.

There, do you see, that long dark green line past this field and the next one? It runs alongside us. Well. there’s another hedgerow you can’t see beyond that, and a broad green path between them. No, you will have to take my word for it, but it’s there. And there are woodpeckers there, too. And blackcaps. And the hawthorn and the cow parsley are boiling over just at the moment. Just at the moment I imagine they’re at their peak. 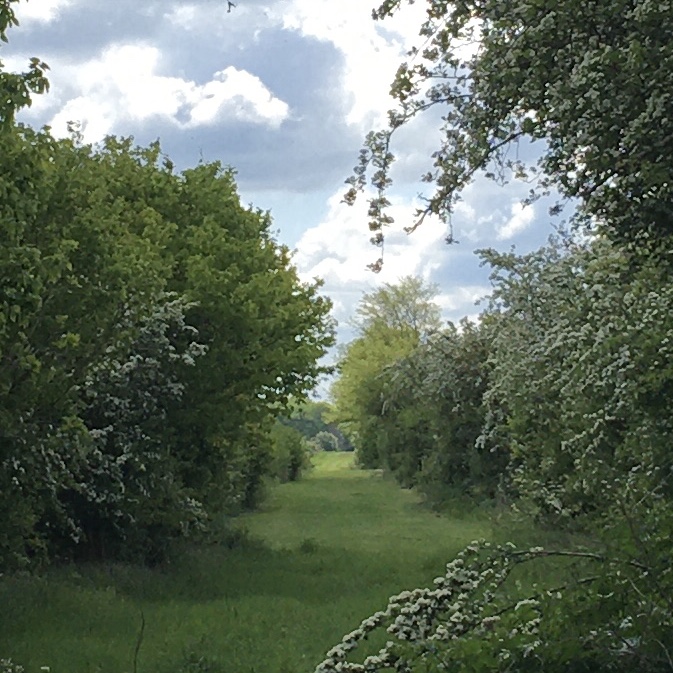